Listening and Connecting With Your Child

Your child tells you that he or she are being bullied. They are not alone. PACER’s National Bullying Prevention Center (2016) reports that one out of every five students report being bullied during the school year. As a parent of a bullied child it is imperative to understand the importance of listening to your child during this time. Now more than ever it is essential that the adults in this young person’s life have his or her back and well-being in the forefront of their minds.

The following are ideas that are found in “8 Keys to End Bullying, Strategies for Parents and Schools.”

Make it Easy for Kids to Talk About Bullying:

It is important to understand how being bullied can make a young person feel. Bullying victims feel isolated and alone. They experience self-doubt, feel humiliated and ashamed and fear being labeled as tattletales if they speak about their experiences. It is our responsibility as adults to help the child feel safe.

Listening is a skill that requires intention. When a child comes forward and tells you about bullying, listening can form the strong link where you can comfort and aid your child. Good listening involves:
Complete attention and focus, (computers, phones and other distractions are put aside)
Good eye-contact. As the listener, it is our jobs as the supportive adults to maintain eye-contact, not our children.
Open-mindedness. Effective listening involves clearing one’s mind of already drawn conclusions, thoughts and feelings about the event.
Open-ended questions: This can help the child sort through their thoughts and feelings without the listener already drawing their own conclusions.
Support and empathy. I cannot stress this enough. It takes tremendous courage for an adolescent to come forward and talk about their experiences of bullying. Chances are they are in a very painful place by the time they talk with you about it. Listening involves you as the caring adult affirming that the they are strong for reaching out. Making a child feel understood and loved will go a long way in establishing a connection with them.

Listening and solving are different. As adults, we may have a strong urge to immediately solve the problem and become highly emotional. Effective listening is a process in which the adult guides the child to think through the steps needed to improve the situation.

How to Respond to a Child Who Talks About Bullying:

Listening to our child recall incidents of being bullied can be downright agonizing for parents and caregivers. Our minds may race from anger to fear, to legal responsibility, to frustration, to confusion and so on. There are strategies that adults can employ when listening to a bullied child that will be incredibly beneficial.

Remain calm. Remember that this young person has taken a leap of faith to speak to you about what happened to him or her. Stay calm and don’t freak out. This calmness will aid in moving forward and move toward solutions.
Express empathy. Simple, honest and effective responses can let a child know they are being heard and that you understand the pain they are enduring. Something as simple as “I am sorry this is happening to you” lets a child know that being bullied is not a normal part of growing up and that you feel bad they have experienced such cruelty.
Thank the Child. Thanking a child for finding the strength and coming forward about their incidents allows them to feel acknowledged and safe. It takes a tremendous amount of trust for a child to share their burden and thanking them will further build a bond for moving forward.
Encourage Problem Solving. This is when you and the child work together to come up with reasonable strategies and ideas for moving forward. The adult’s job is to continue to support the child, listen to their ongoing thoughts and feelings, and assure them that you will both work together to come up with constructive solutions. A child that has been bullied is apt to feel helpless. The adult’s role is to assist the child in reclaiming feelings of power and control through the process of listening, supporting, affirming and thinking through solutions together.
Follow-up. Follow-up after a conversation about bullying is crucial. A concerned adult needs to check in with the child consistently after the initial conversation to check on their physical and emotional well-being as well as to see how strategies and ideas are working.

A child who has been bullied who knows they have adult support has a better opportunity to move on and heal from their experience. Care, calmness, rational behavior, support and empathy are key elements which can help a child feel cared for and not have them carry their burden by themselves. 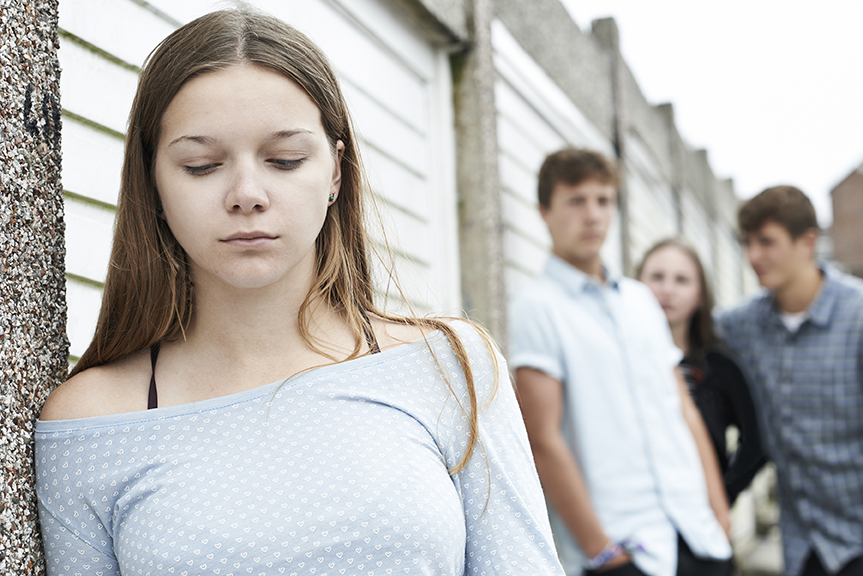